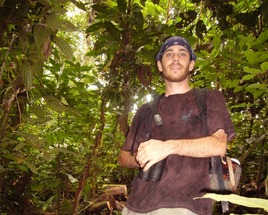 ​I completed my Ph.D. at New York University where I focused on three major areas:

(1) the evolution of primate color vision
(2) the use of genetic methods to explore population-level signals of adaptation
(3) the prey capture behavior of wild primates
​In South American primates, the key gene responsible for red-green (or trichromatic) color vision is located on the X-chromosome. As such, most males are red-green colorblind. In squirrel monkeys of central Amazonia, there are 3 different versions (or alleles) of the gene. Female squirrel monkeys will posses full color vision if they harbor different alleles on each X-chromosome. If both X-linked alleles are the same, however, then females will possess a colorblind visual phenotype, like the males.

I performed field research in Ecuador from 2005 until 2008 to explore the different color vision abilities of squirrel monkeys. All fieldwork was conducted in primary rainforest at the Tiputini Biodiversity Station in Ecuador in the Ecuadorian Amazon basin.﻿ I determined the color vision of each focal animal by collecting biological samples and running genetic tests on the X-chromosome sequence of DNA found in the sample.

I utilized the latest technologies and tools in the field, including the databasing softwares HanDBase and Microsoft Access to develop the use of handheld computers for data collection at our field site. I was trained in animal capture and anesthetization for telemetry and radio-collar use. I relied on GPS/GIS softwares for high-accuracy spatial measurements. I performed behavioral sampling using dictation recorders, and the sound files were automatically databased with ViaVoice, a voice recognition software.
I secured funding for the entire project through grants from the National Science Foundation and the Wenner-Gren Foundation. While in Ecuador, I formed valuable professional relationships with scientists from Latin American countries, as well as others from North America, Europe and Asia. I also trained and supervised teams of student research assistants from Ecuador, Colombia, England and the United States.
​
Once I completed my fieldwork, I extracted over 250 biological samples, including blood, hairs, tissue and feces. I quantified these extractions using real-time polymerase chain reaction (PCR), and I performed a population genetics analysis with a panel of fifteen microsatellite markers that were genotyped using multiplex PCR. Most importantly, I developed a novel method for quickly assessing the color vision phenotypes of squirrel monkeys using SNP genotyping assays and real-time PCR.

While my own research focuses specifically on genetic variation as it relates to different types of color vision in a South American primate species, I’ve used molecular genetic tools to address other realms of anthropological research, including retrovirology, dispersal behavior, gene flow, growth and development, mating patterns, and population structure. As a a graduate student, I became captivated by research into sensory behavior, manual dexterity, and primate brain evolution.